We quickly focused on the space of food, and specifically grocery stores. We went back and forth through our initial research on topics like food waste, in-store retention, or in-store optimization. To begin the understand the pain points our users faced as a result of grocery shopping we conducted semi-structured interviews, and in-store observations.

The questions we asked during the Interview related to:

We conducted 7 semi-structured interviews. General insights we were able to gather about our users were:

General Insights from the Observations

Based on our initial insights from the interviews, specifically relating to wasting time in store. We conducted in-store observations around metro-atlanta. Our team observed shoppers in their environment, and made notes of things like: body language, what devices they used, and their paths through the store.

Our observations from the 5 grocery stores were:

Converging on a Problem Area

Grocery shopping is both a large retail market, as well as an everyday task. Based on our user research to illustrate this second-nature behaviors we created a Journey Map. This allowed us to abstract ourselves from the problem while focusing on the seemingly intuitive task of “grocery shopping”

In order to synthesize our research we used an affinity mapping technique. This allowed us to create broad categories that matched to our specific insights. Based on these broad categories we stack ranked the insights based on need.

What we found was that our primary shoppers enjoyed grocery shopping, but were bothered by the inefficiencies. Therefore by providing our shoppers a stress-free, efficient, and quality shopping experience we could assume our shoppers would be happier, and as a result spend more time in stores. We created 6 user needs to guide us through the forthcoming solutioning stages.

Ideation in the Space

We conducted an informed brainstorming session as a team to begin ideation in the space. Each team member was responsible for coming up with 10 quick solutions. We later curated these sticky solutions by clumping them in to general categories. The general broad solution categories that emerged from this session were:

While each category had merit, due to our tight timeline we narrowed our scope to two categories we could further iterate on. We chose to move forward with the two that excited us most, and best matched our initial user needs:

We created very simple paper sketches of the two categories, not limiting ourselves to feasibility or medium. In the end we had ideas like in store quests, children's companion applications, smart carts, and a google maps esc store interface. Since our sketches were crude we ,as a team, narrowed down from the many ideas to one idea we could continue to iterate on. Based on our assumptions about perceived cognitive load we chose to move forward with a navigation application, this ensured a blessed cognitive load on our users, while still maintaining an enjoyable experience. 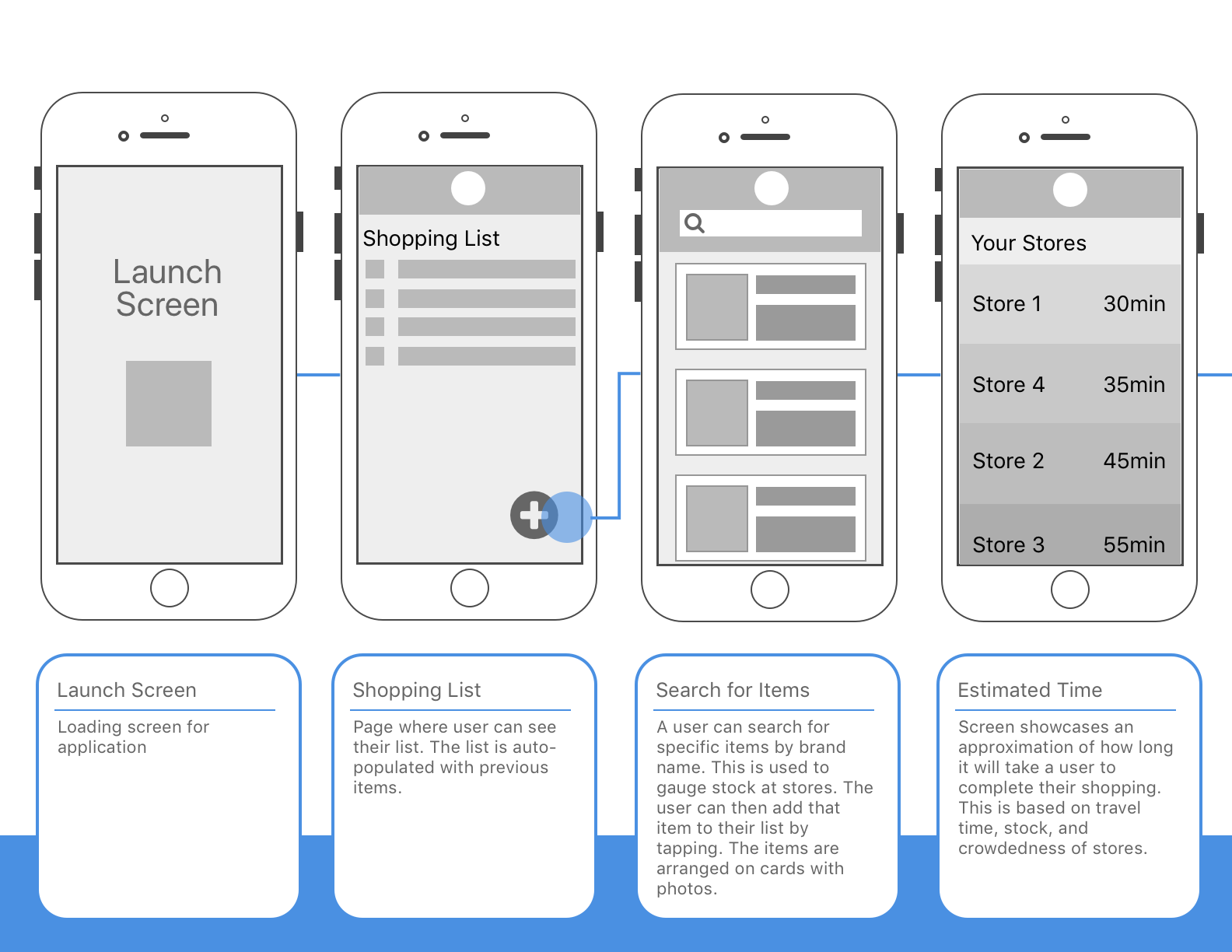 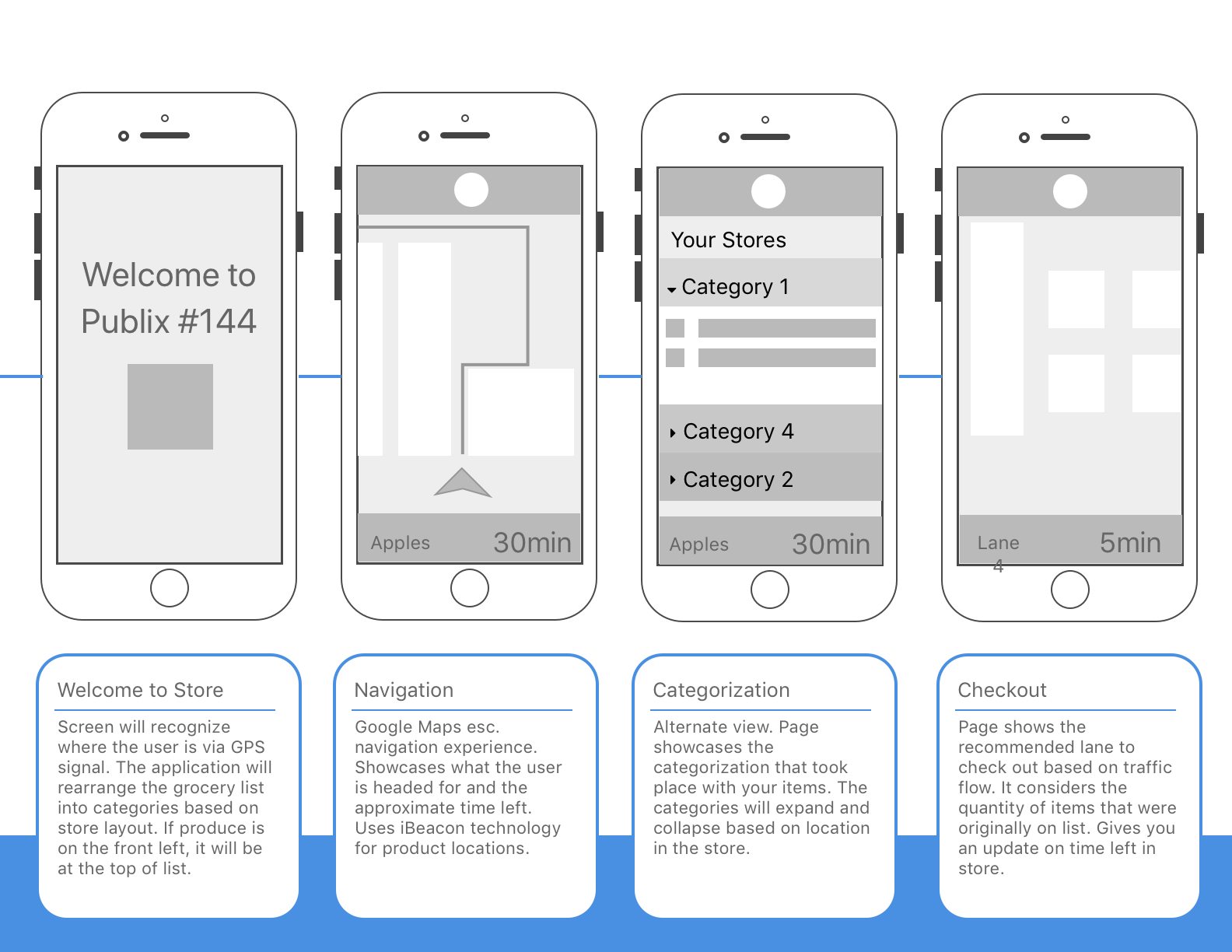 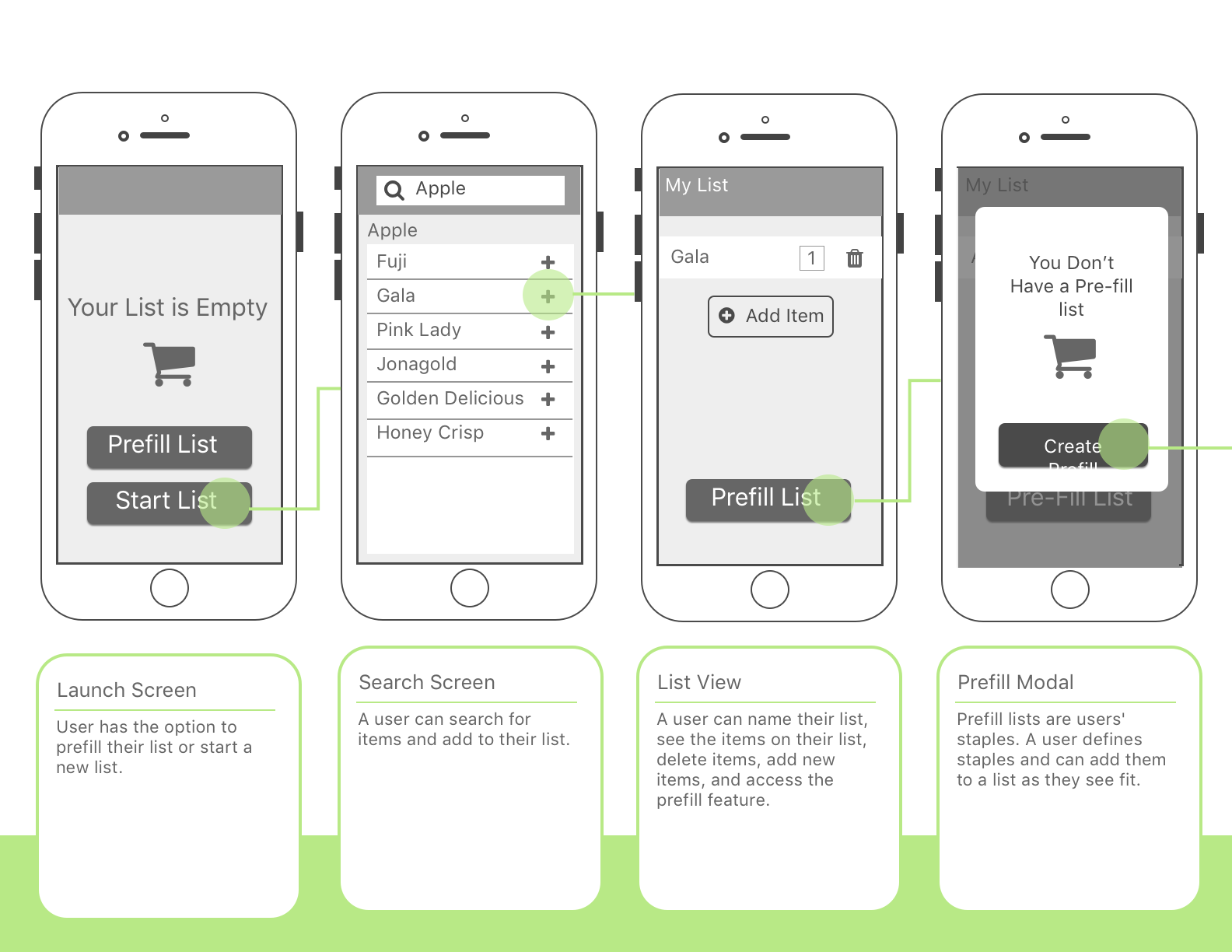 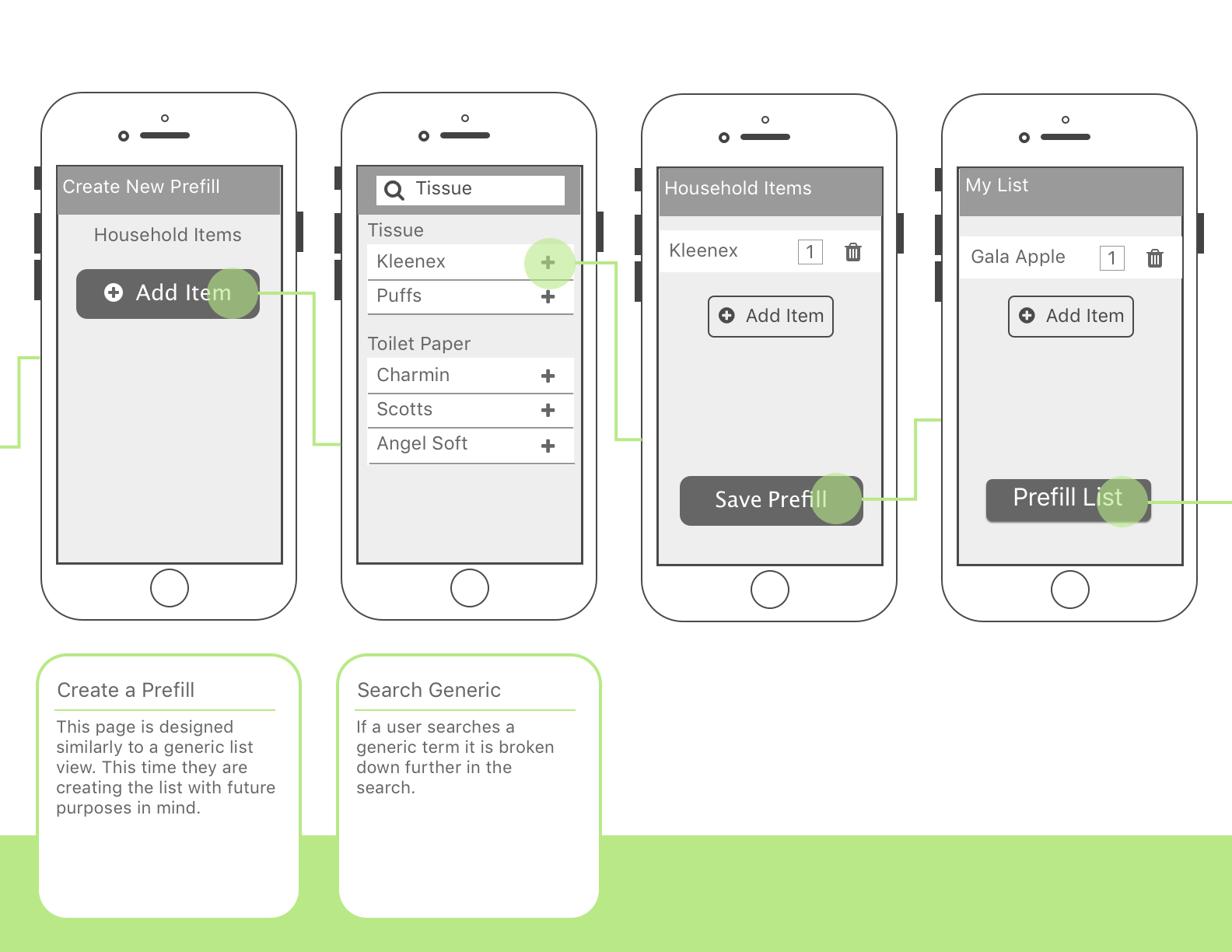 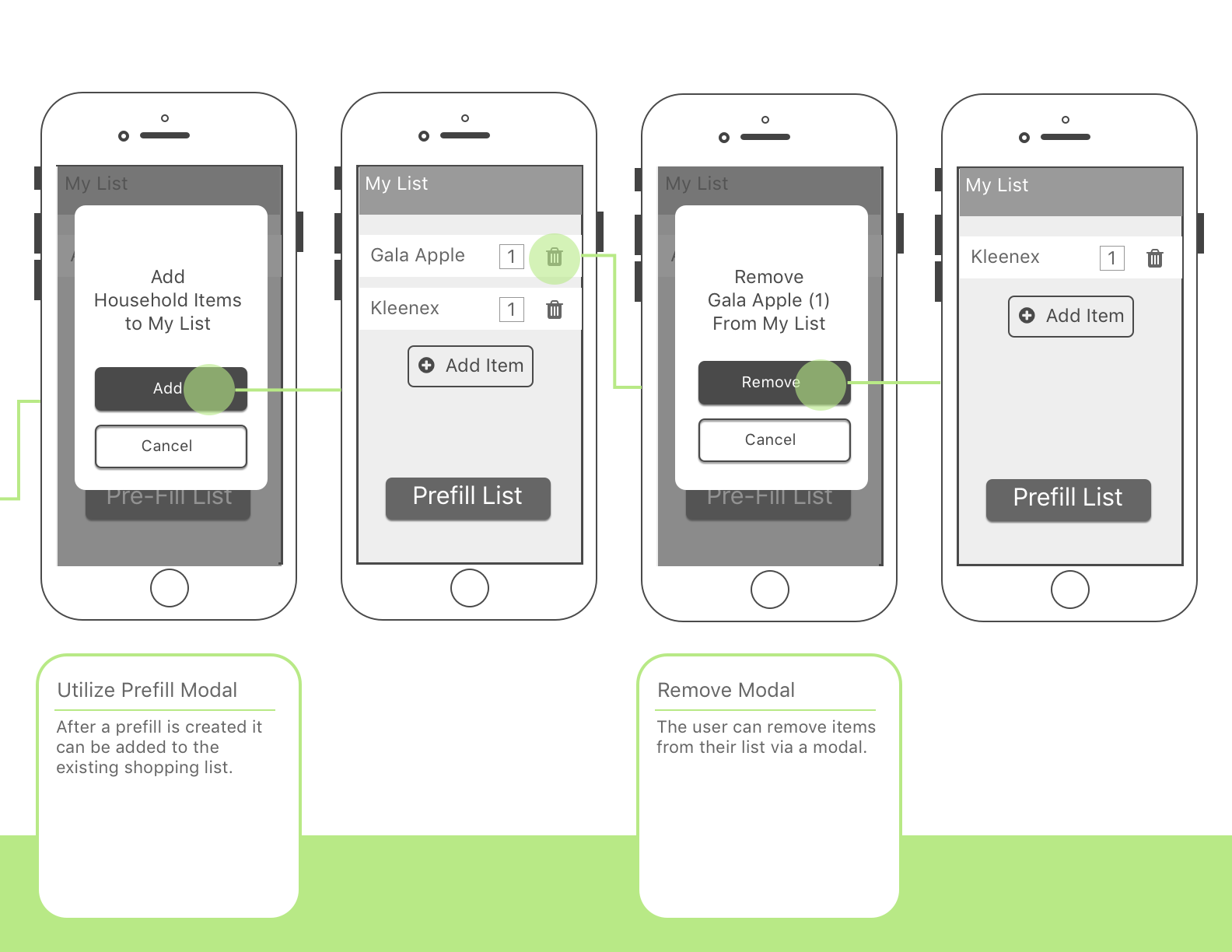 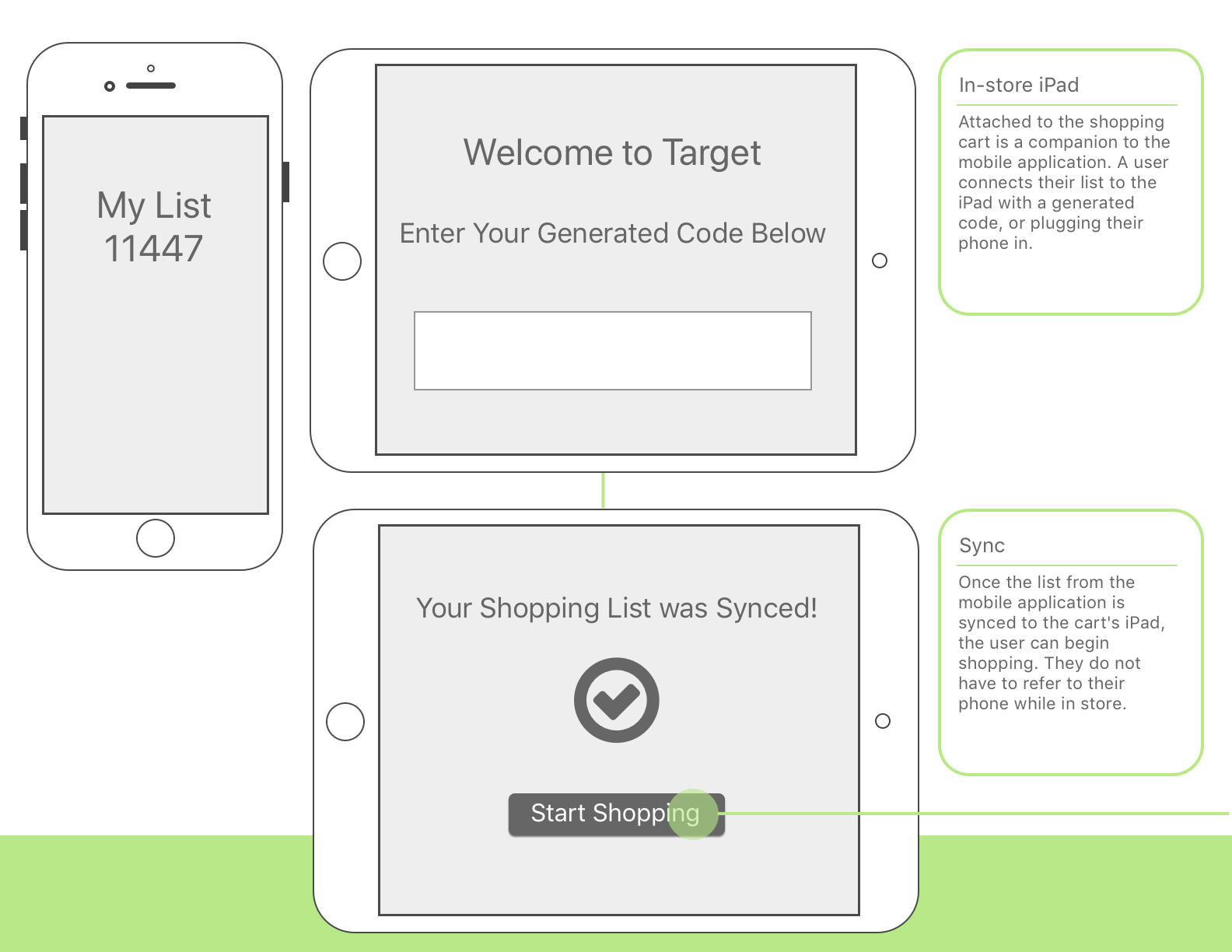 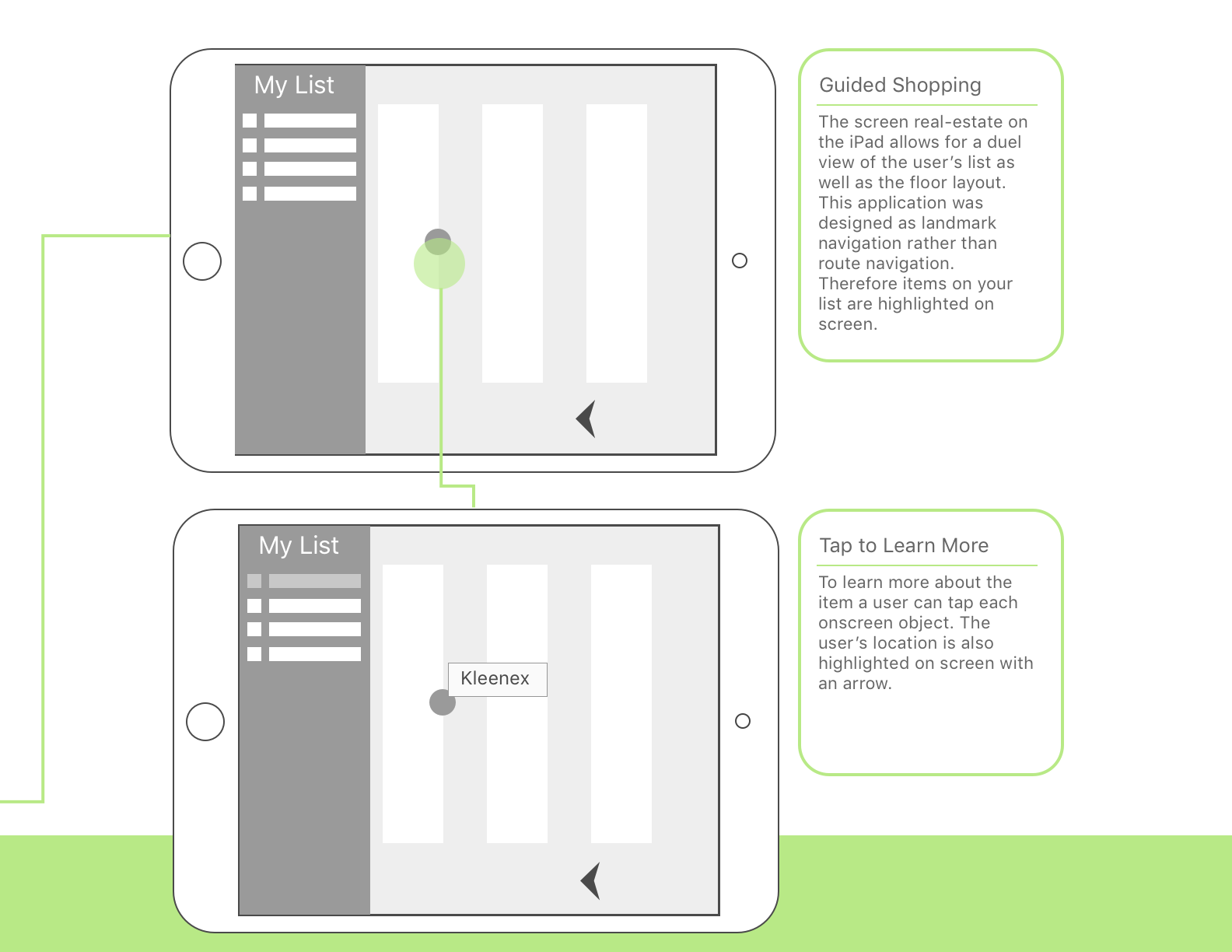 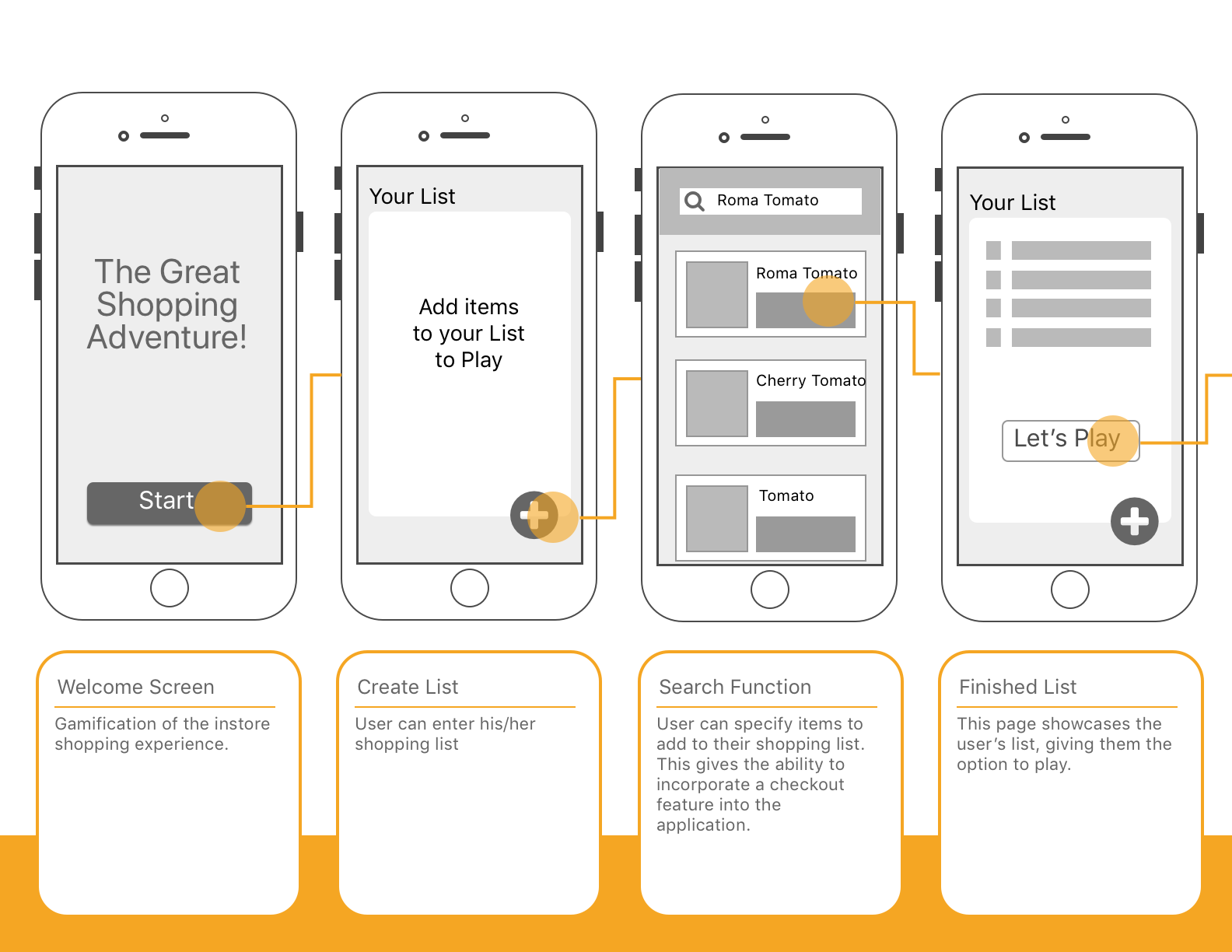 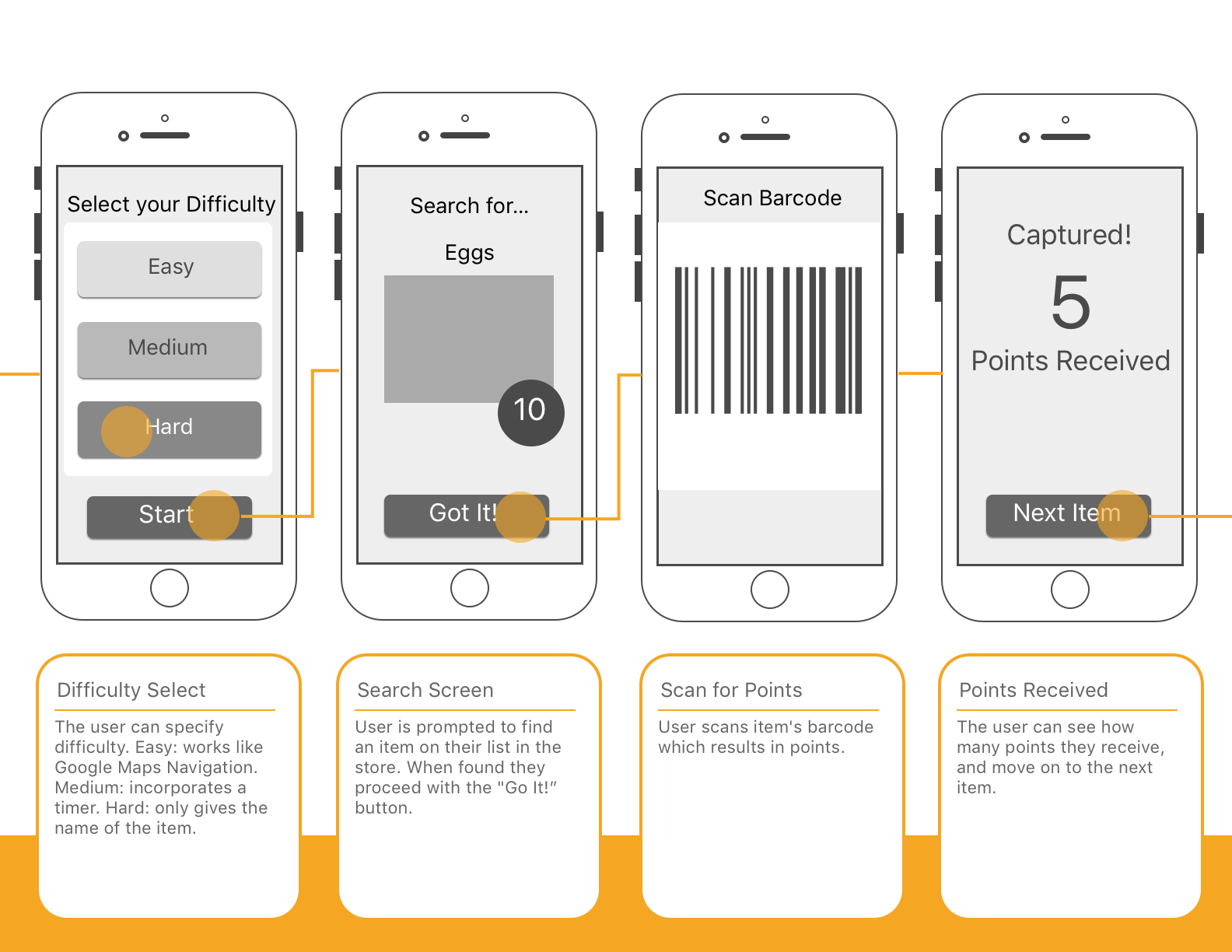 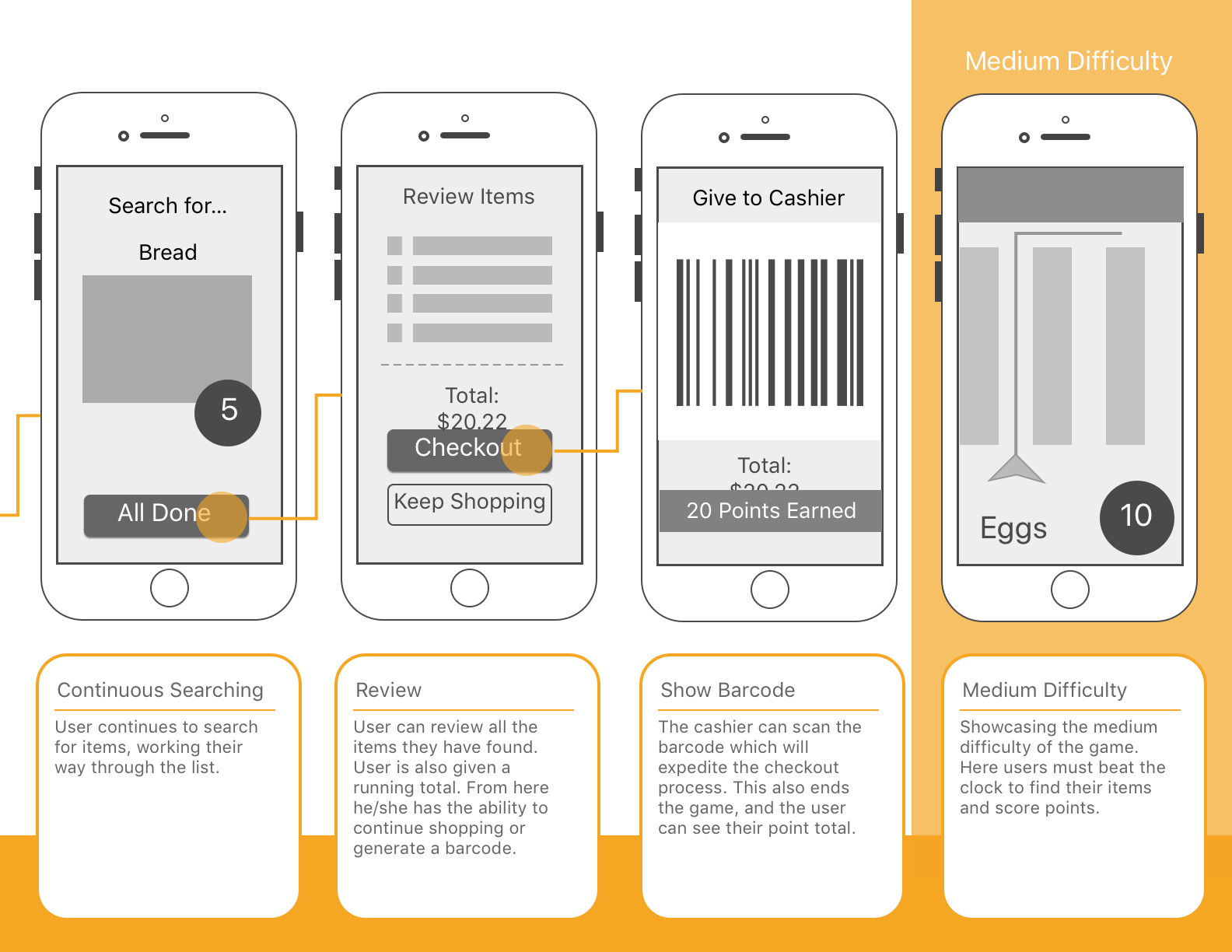 During a team meeting to discuss the mobile application for wayfinding, a teammate mentioned that he had recently seen a bike navigation device that mounted on the handlebars, and acted as a small display with directions. We riffed on the idea by combining it with our pre-existing mobile application.

Our reasoning for quickly pivoting to this new idea, goes back to our initial user needs. We wanted our users not to waste time, but we also wanted to ensure they enjoyed the shopping experience. By utilizing multiple stimuli our user would conceivably rely on peripheral vision to receive navigational instructions. This eliminated the need to stare at the phone while navigating through the store.

Our idea was to have the user utilize their phone at home to create a grocery list. Once in store, their phone transitioned to a navigation device added by synchronized lights. A path would be devised based on their list, and our users could enjoy their time in the store, and not have to worry about a new or confusing environment.

For the purposes of prototyping this idea, we chose to utilize Arduino capabilities. I had little experience with Arduino, but was eager to learn. A lot of our prototypes fidelity was dictated by our plans for testing. We were really curious about our lighting system, so it’s fidelity needed to be the highest part of the system, to ensure minimal user interface during testing.

The prototype was created with and Arduino 101, which has onboard BLE technology, a Neopixel Strip, a cardboard iPhone holder, and a generous amount of hot glue. The onboard BLE technology of the Arduino allows us to control the lights of the neopixel strip remotely. Therefore we could achieve a synchronized guidance system, by having the system react to the user.

Our application had two main components:

To ensure the viability of our in store navigation we developed an A/B between subjects testing guide. This allowed us to have a controlled, traditional environment, the current system. Which we could then compare to our proposed solution. To compare the two groups we compared the total distance traveled to find the three items. We measured out the distance between each items prior to testing.

We chose to simulate our grocery store environment in the stack of the library. This allowed us to mock up convincing shelves and aisles for our participants to wander throughout. One group was given a paper grocery list, with a list of items they were to find in the store.

Our participants could utilize the in-store signifiers like the aisle signs, or wander. The second group was given the same list of items, but on our mobile application with the lighting rig attached. This was a more complicated test as it required a lot of moving parts. The lighting controller walked with the user as they navigated throughout the store, correcting their path with the color of the lights. While another teammate took note of the total distance walked by the participant (utilized the floor tiles to keep track).

That being said, in general, the at home functionalities of the application tested well. Our users understood the concept of creating lists and even our unique functionality of the creating a prefill list. While debriefing with users we discussed their potential uses of the application. All of the participants remarked they would use a similar application. Therefore, our initial set of features that set up the user to getting in to the store were working.

But of course, what we were really interested in was if our users used the lighting in the mobile application. To be honest, our results were inconclusive. We had some difficulties with the fidelity of the prototype. While the lights changed dynamically the map interface did not. Therefore we often had participants playing hot and cold with our application looking at the lights, and guessing their way through the store. That being said, we also had users instinctively understand the lights and quickly navigated their way to the correct location. The graph below shows our control group (the ones with just the list) compared to those with the lighting application.

Since we had such inconsistent results with our main feature, we would need to iterate and test again. I would like to test with both a dynamic map interface as the lighting to understand how the user interacts with the device. This could be achieved by using RFID technology in conjunction with GPS.